Viking caftan for a friend!

This weekend two of my best friends stept up as Baron and Baroness of Gotvik. Solvind are intrested in the vikingstyle and Enaro didn´t own any clothes from this period so I decided to help him with his outfit. He wanted a caftan and he choose the fabric and the color green (and some days later he also choose the bottons). With out him knowing I had decided to do embroideries on his caftan. Some years ago I was visiting Fotevikens vikingamarknad and there a man had a caftan that I feel in love with and since then I wanted to do a similar one! 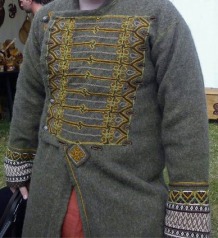 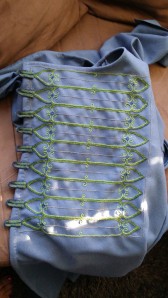 When I started to google it I thought the coat were Rusinspired but then I found a site that talks about diffrent findings that possible could be viking caftans and after reading it I changed my mind and decided that his caftan could been inspired by a alan style riding coat. I thought about doing it with a opning in the center but when none of the styles seems to have any “whole findings that “proves” that they had this kind of caftans I decided to use the cut I like the most. This is the best part with the SCA that it only has to be inspired and not proven…But of course I really would like to know if somebody now something about this because I really only know sources from internet that I managed to find under the week I made his caftan.

In the Metropolitan museum journal Elfriede R Knauer talks about the ridingstyle coat. I know that I haven´t done the “right” type of pattern and cutting. I choose to do a easier cut because there wasn´t enough time to make the pattern and fitings (and also to long distans from me to Enaro). But I have a pattern for a cothardie for him at home that I made for him last summer so I used it to get the right size. When I fitted it on him the day before the event where starting the arms where far to big and I had to remove the gussets under the arms and attach the arms with out them. Lesson: Remember to cut the armpit straight and don´t use a cotehardie fitted armpit….). 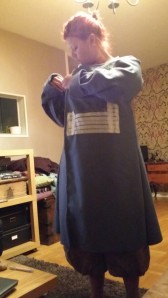 I wanted to know if the embroidery was period and found out that there aren´t so many findings on embroiderys from the  vikingperiod either (much room for interpretation). But I´ve learn one that actually reminds very much about the edges of the embroidery on the “Foteviken” caftan. For the embroidery I used linnen yarn and split stisch. Here are a link about Viking embroidery 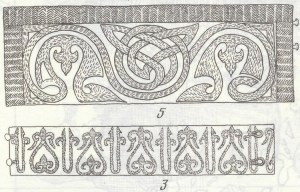 I realized that they didn´t often use bottonholes so when I realized that I didn´t own any ribbon I made some bricks and started to weave a ribbon. It´s my fourth time doing tablet weaving and my second ribbon. I made it with alpaca yarn and really loved doing it again so now I want to do more weaving (and I really want to have my house soon so I can set up my tabletweaving “loom”(?) ).

I started it on friday the 7 march so it took a week to do the project. There are still some things to fix like embroiderys on the arms, maybe do some more ribbon to put on the “lower part” of the caftan and some lining to protect the embroidery. But all in all I´m happy with the result.

Here are some other links I used while making the coat: 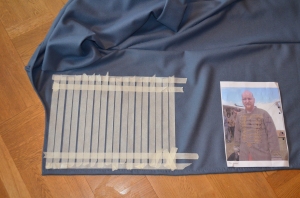 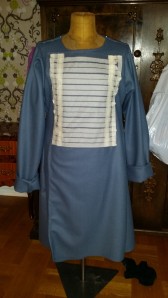 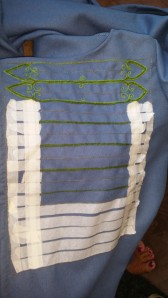 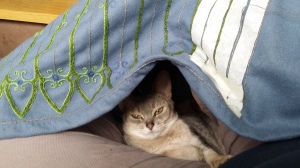 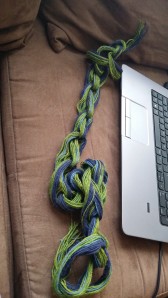 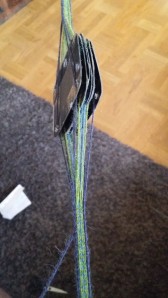 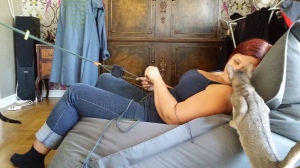 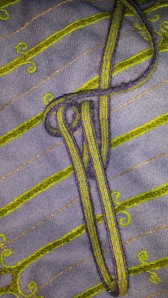 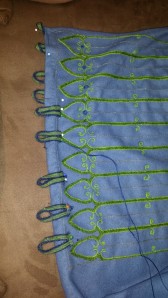 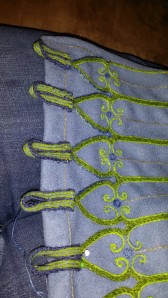 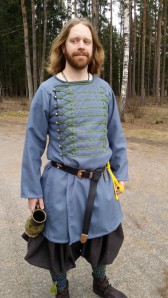