Since I got only two “everyday wool dresses and much more court garb I choose to wait a bit with my planned new pearl project (more about this in a later post). And instead I´m going to start with the green short sleeved cotehardie that I have been planning since last summer. I bought a lovely green wool from Handelsgillet and the plan was to do something like this dress but with buttons all the way down and removeble tippets. 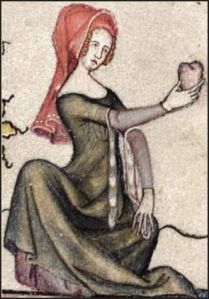 I have found some italian cotehardies that I really like, and since I´m a sucker for italian fashion from 1400-1600 century that fits me good! That both of them are green and purple like my colours in my coat of arms are even better.  I do plan to do the dress green and the tippets purple instead.

The tippets are going to be shaped like this: 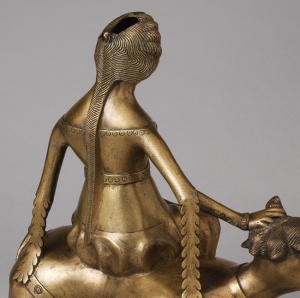 I´m also thinking about adding pocket slits on the green one but I haven´t made up my mind yet. 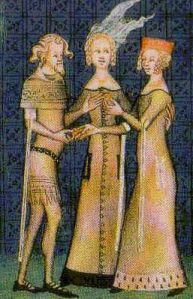 At Pennsic I found alot of nice fabrics and one of them are a tin grey/brown wool that will make a perfect middle layer dress! And that matches the colour on the first manuscript painting well.  I also bought small pearled pewter buttons from Billy and Charlie. They are among the best salesman I´ve ever meet. I think I went there 5 or 6 times just because of them and there ways (and prices of course) <3. I´ve planning to put them on the arms on the grey/brown dress.

I have earlier made three dresses inspired from Herjolsfnes, all of them was made after dress nr 38. I didn´t make them lose fitted do, I choose to do them thight. Those dresses qvick became my favorite type of dress because of the fitting! When I did them I did not do the pocket slits, and I used buttons on the arms and lacing on one of them and buttons and short arms on the other one. I don´t have any picture of me alone in the outfit but here I am with some friends at Visby 2013.

And one where I´m fixing my moy bog where you can see the sleeve gusset. I´ve found a picture on a type of gussets that looks like this but have two pieces instead and bottons!

So for the middle dress I probably going to use the same pattern as I used last time I did nr 38, only this time with the pocket slits. I will maybe add tablet woven piping in the pcokets slits and the arm and front opening. For the green dress maybe nr 45 or some other pattern. And if I have patiens enough a frilled veil!

With a bit of luck I get so much green wool left that i can do a miparti with one of the silk wools from Pennsic, they match each other good I think. And my lovely bucklet “based on a piece c. 1240-1250, Carrand Colection, Museo Nationale del Bargello, Florence” from Raymonds quite press will be great to the dresses. And so will my belt that I´ve ordered 😀