6 days before the event I got a question if I wanted to do a Dragon´s bowle for Mistress Lia de Thornegge. Our signet clerks mail had been hacked and this was discovered that weekend so therefore the time to make the scroll was short. I couldn´t resist to say yes since Lia is my Mistress and I really wanted to make the scroll. The Order of the Dragon’s Bowle is an award which is “awarded at the discretion of the Crown to those who have displayed notable attention to authenticity”.

I choose to use the “Mira calligraphiae monumenta” manuscript as inspiration. The manuscript was written in 1561-62 by Georg Bosckay and illuminated by Joris Hoefnagel 3o years later. Since Lia´s persona is from ca: 1570 and the award that was given out are for autencity I tried to find a manuscript that was fitting in time and from England. I had a hard time finding something that I thought I could actually manage to do since I still need to practice my calligrapy and the english manuscripts from this time has a very fine hand! The Mira manuscript also has very fine texts but they seemed easier to learn for the short time I had.

About the Mira manuscript:

“The manuscript stands at an art historical crossroad. It constitutes one of the last important monuments in the grand tradition of medieval European manuscript illumination. In addition to its meticulous studies of flora and
fauna, however, it points directly to the emergence of Dutch still life painting, an essentially new artistic genre of the seventeenth century. Bocskays achievement bears an analogous relationship to the history of Western writing. Produced at a time when printed books had almost totally replaced manuscripts, it celebrates the function of the handwritten book as the principal preserver and disseminator of knowledge while also showing the concern with self-expression that would dominate the uses of script from the sixteenth century on.” Preface in Mira Calligraphiae Monumenta, L. Hendrix & T. Vignau-Wilberg, The J. Paul Getty museum. (1992)

“It is argued here that Mira calligraphiae monumenta in its present state provides an extended meditation on the efficacy of imagery versus that of the written word. The manuscript evolved in stages over a long period of time and now consists of two distinct parts. The first of these,comprising 123 vellum and 5 paper folios, was originally written as a model book of calligraphy i n 1561-62 by the imperial secretary Georg Bocskay for the Holy Roman Emperor Ferdinand I Hapsburg (r. 1556-64). Bocskay created the model book as proof of his own preeminence among scribes and as a testament to the universal power of the written word both past and present. In so doing, he assembled a vast selection of contemporary and historical scripts as well as many exhibition hands, scripts intended not for practical use but for virtuosic display. Bocskays employment of the finest white vellum as a writing surface complements his flamboyant technical prowess and exceptional sureness of hand. The visual splendor of scripts was pushed to even greater extremes by the lavish use of gold and silver. More than fifteen years after Bocskays death in 1575, illuminations were added to the model book by the Flemish miniaturist and imperial court artist Joris Hoefnagel at the behest of Emperor Rudolf II (r.1576-1612), the grandson of Ferdinand I. Europe’ s last great manuscript illuminator and a man of immense learning, Hoefnagel devised an ingenious figurai response to Bocskays scripts. s.2  L. Hendrix & T. Vignau-Wilberg, (1992). 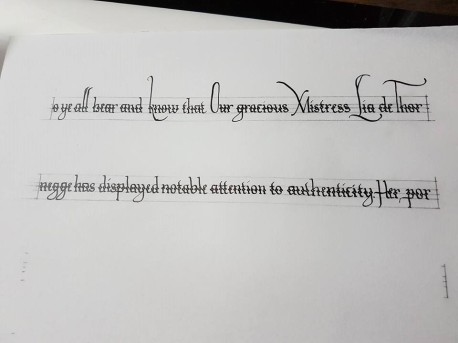 The gold was made by gold paint (shell gold probably) since I don´t have any shell gold or gold paint either I decided to do the gilding with gold leafs. Trying to make the tin lines with gesso that needs to be applied atleast two times wasn´t the easiest but I think it ended up quite good anyway. I made the choice not to scrape away gold even if the lines was to thick at some parts, gold is and was expensive and also I didn´t want to risk to damage the scroll. 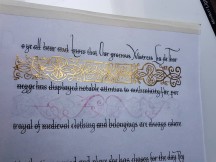 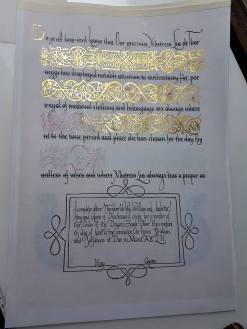 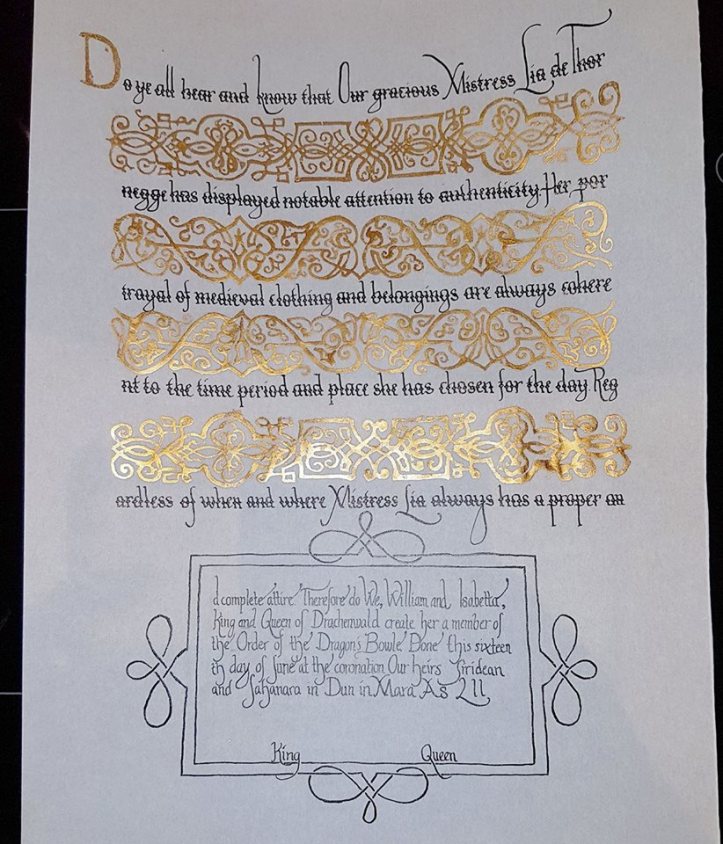 The scroll was supposed to be handed out in Dun in Mara (Ireland) on Friday the 16/6, since I got the request the 11/6 and the only people I knew that was going there where William and Isabetta, (then) King and Queen of Drachenwald and Lia and Ed. Isabetta and William where leaving Sweden in the middle of the week so I contacted Lia and asked if she could deliver a secret package to the King and Queen if I had time to finish it. She said yes and I did my best to try and finish in time. The scroll was done on Wednesday but since the postal system really aren´t reliable I didn´t post the scroll, instead Isabetta printed a copy of the scroll as a stand in. Lia was given the actuall scroll at Cudgel to take home (and get signed).