I decided last week to try and do my own brushes. I have been given some old mink furs and choose to try and use this for making some paint brushes. Cennini talks in his book about how to make brushes and here is the chapter on “How to make Minever Brushes” that can be found on p. 40-41.

“In our profession we have to use two kinds of brushes: minever brushes, and hog’s-bristle brushes. The minever ones are made as follows. Take minever tails, for no others are suitable; and these tails should be cooked, and not raw: the furriers will tell you that. Take one of these tails: first pull the tip out of it, for those are the long hairs; and put the tips of several tails together, for out of six or eight tips you will get a soft brush good for gilding on panel, that is, wetting down with it, as I will show you later on. Then go back to the tail, and take it in your hand; and take the straightest and firmest hairs out of the middle of the tail; and gradually make up little bunches of them; and wet them in a goblet of clear water, and press them and squeeze them out, bunch by bunch, with your fingers. Then trim them with a little pair of scissors; and when you have made up quite a number of bunches, put enough of them together to make up the size you want your brushes: some to fit in a vulture’s quill; some to fit in a goose’s quill; some to fit in a quill of a hen’s or dove’s feather. When you have made these types, putting them together very evenly, with each tip on a line with the other, take thread or waxed silk, and tie them up well with two bights or knots, each type by itself, according to the size you want the brushes. Then take your feather quill which corresponds to the amount of hairs tied up, and have the quill open, or cut off, at the end; and put these tied-up hairs into this tube or quill. Continue to do this, so that some of the tips stick out, as long as you can press them in from outside, so that the brush will come out fairly stiff; for the stiffer and shorter it is the better and more delicate it will be. Then take a little stick of maple or chestnut, or other good wood; and make it smooth and neat, tapered like a spindle, and large enough to fit tightly in this tube; and have it nine inches long. And there you have an account of how a minever brush ought to be made. It is true that minever brushes of several types are needed: some for gilding; some for working with the flat of the brush, and these should be trimmed off a bit with the scissors, and stropped a little on the porphyry slab to limber them up a little; one brush ought to be pointed, with a perfect tip for outlining; and another ought to be very, very fine, for special uses and very small figures.” p.40-41

I tried two various way of making small bunches of hair. One were I picked hair by hair from the fur and one were I used pieces from a minks tail (I bought two minks from a flea market last summer).

Started by picking hair from hair with tweezers from the mink coat, collecting them in small piles on a waxed double folded silk thread. Getting the hairs very evenly, with each tip on a line with the other required much more patience than expected …
Therefore I tried to  pick up a small pile of hair with tweezers and then smeared the hairs with a mixture of gumarabicum mixed with water and a little honey that was left overs from paint making. This way it became much more easy to handle the small bunches of hair. In addition, it became easier to see the expected size of the brush on the basis of the amount of hair.

Some pictures of how the process looked: 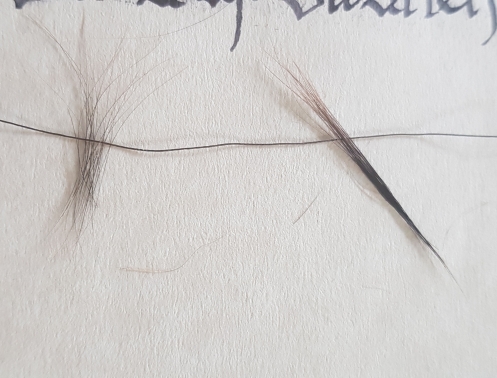 Here is some pics of how it looked when I gathered hair in the other way. Then the thinner hair also came from my coat and it became easier to make thicker brushes.

After collecting enough hair, the thread needs to be tied tight around the hairs. When this is done, a top of a feather is needed, I had magpie- and goose feathers at home so decided to try both. I cut off the top of the feather with a pair of nail scissors and then clean the tip from membrane, I use a crochet hook for this. Then the small hole on the top may have to be widened a bit, either by cutting a little piece of, or by taking a needle or a awl and gently rotating in the hole. I also tried grinding it on a piece of very fine sand paper. 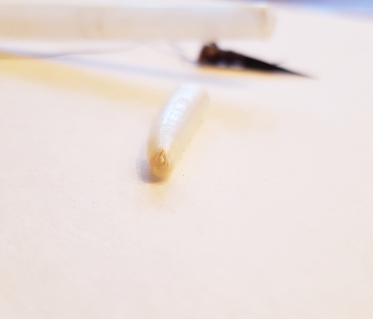 Now it was time to put the tied-up hairs into the tube made from quill. Because of the gum arabic mixture the tip was hard and quite easy to get through the tube. I did some different brushes and realized that it was better to have a thicker knot in the back end so that the tip fits properly in the tube. 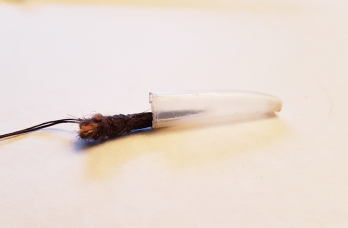 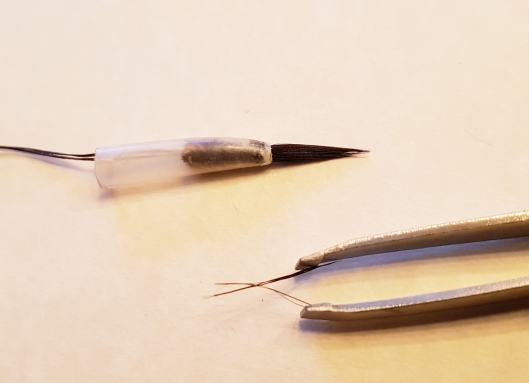 I used both tweezers and a awl to get the tip through the tube. I managed to crack the end of the tube where the stick should be attached each time, so I decided to use this to pull the thread through and then spin the thread around the stick when it was time to attach the brush tip to the stick. For handles I used grill sticks and oak sticks that I picked from one of our oak trees in the garden. Some fitted the feather tubes better then others and I used fish glue to make two tips stay on their sticks.

When the tip was fixed on the stick, I twisted the threads around the handle, attached the thread with some knots and then the brush was ready for use.

Here are some of my brushes. I need to figure out how to make them thick enough without the tip becoming to long. Otherwise I am quite pleased with the result!