For a while now I have made various material to use when scribing, I have made different kinds of gessos and even tried boiling fishglue to use in one of them (the glue works but smells really bad…). I have made shellgold, glair, learned how to make malachite and ultra marine pigments (among others), begun to make bone white pigment, made iron gall ink, learned how to cut reed pens and quills, made my own brushes and made some more scrolls that have not been posted here yet. I will write about some of the things here and today I start with my first tries of making iris green paint. 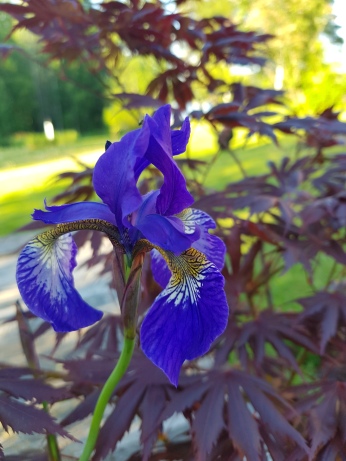 On Double wars in May, Master Johannis, that is a laurel in calligraphy and illumination was invited to come and teach. Among other things he held classes on how to make pigment. He talked a little about verdigris, sap green and iris green and since I knew that I had lots of it at home I decided to try and make pigment out of it as soon as they had started to flower.

Daniel V. Thompson writes about Iris green in his book The materials and techniques of medieval painting. He writes “The  most important of the substitutes for verdigris were sap green and iris green.” p. 169. Sap green is made from buckthorn berries while iris green is made from the blue and purple flowers of iris. I have the kind called Siberian Iris (Iris sibirica in latin and Strandiris in Swedish). According to Wikipedia,which I know is not considered for being a good source says this about Siberian Iris:

“It has been around before the 1500s and was first called Iris augustifolia media by Carolus Clusius.[3] It was first collected in Siberia by monks in the Middle Ages and grown in monasteries, later it was distributed around Europe, where there are now many cultivars.[32] It has been cultivated in Britain since 1596.[33] It was then first described and published by Carl Linnaeus in his book, Species Plantarum 1 39 on 1 May 1753.[34][35] Who renamed the iris, Iris sibirica.[3] ”

I will dig deeper in to this information and see if I can confirm it another time.

Thompson also writes “The chief rival of sap green in late medieval manuscripts painting was the iris green. This was made from the juice of iris flowers, sometimes mixed with alum and thickened, like sap green, but more often prepared as a clothlet. Bits of cloth were dipped in alum solution and dried, and then dipped into the juice of iris flowers and dried, again and again, until they contained a sufficient quantity of the colour”….”This iris green was very much used in the fourteenth and fifteenth centuries.” p.171, The materials and techniques of medieval painting.

I started with picking the flowers, it did hurt since I have planted them and nursed them. They are one of my favorite in my garden and I have been waiting for them to blom since they do not blom the first year after being replanted as I have done with mine! The petals is the part I wanted so the flowers where cleaned from all green parts and then the petals was chopped into pieces and put in a casserole with distilled water (just enough to cover the leaves). The mix were then boiled/shimmered until there was no purple colour left in leaves. Strained it through a coffee filter and then pour the liquid back into the pan together with the rest of the petals and reapeated the process. 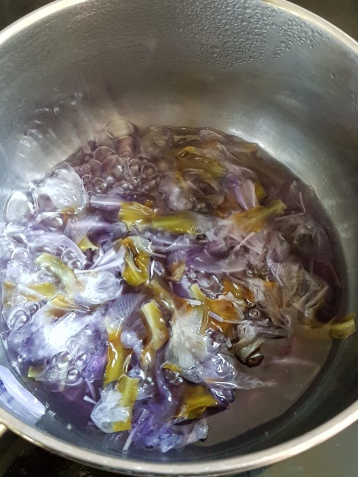 When the liqiud had been strained once again I added som alum to the liquid and let it shimmer until it was reduced to about 1 dl of fluid.

Then I reapeated the whole process with another pile of flowers but instead of distilled water I decided to use our tap water. I realized that our tap water had another  ph-value and therefore gave another shade to the liquid when cleaning the casserole.Here is a picture of how diffrent they ended up right after boiling. I later realized that they would not stay in this shades but it was fun having iris green lakes in my coat of arms colours for a short while.

When Master Johannis held his classes at Double wars he showed us how the lake made from brazil wood changed colour depending on if adding lye or alum so I decided to try this with my iris lakes. And I ended up with 4 diffrent shades. This is the lakes I ended up with:

Master Johannis also told us that lakes (water that been coloured by wood or plants) needed something to grab on to if we did not want to use it as a lake. Either a cloth or something else like chalk. Since I ended up with not having enough lake to make clothlets I added alum directly to the fluids. I also decided to try and and add chalk to it. I did not have any chalk at home but had read in Thompsons The materials and techniques of medieval painting that they used eggshells to make white paint to use with verdigris (since lead white dont react good with copper).

Thompson writes “For mixtures with verdigris and orpiment a white was sometimes made from egg shells, calcined in the same way as bones. p. 95-96. This made me think that I could use egg shells to bind the pigments with. Egg shells contains 90-95% of calcium carbonate and do not dissolve well in water. So I grinded upp egg shells, added and added them to my fluids (3 of 4 of them) and then I just waited for the water to evaporate. 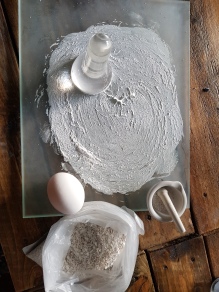 When the water was gone the pigments had dried into the egg shells. The coloured egg shells where grinded on a slab and I added a small amount of water, gum arabicum and some honey to increase some shine that had been lost when adding the egg shells.

Here is the diffrent paints I ended up with.

I also did some experimenting and added a bit of red wine to one of my fluids. The fluid started to react with the wine and egg shells and carbonic acid was released (I happen to live with a man that know some things about chemistry, very useful when making paint…).

I have also tried to use dried iris flowers, the colour ended of the lake ended up darker but still have to much water in it to make a good colour sample. One experiment is still left in my window. Iris lake without alum but with lye and egg shells added to it. This lake is yellow! Here is a pic of the iris green with red wine in it and my on going yellow experiment:

And here is a pic of my two remaning lakes, the one on the left is from my first boiling done the 2 june on fresh flowers, and the one on the right is from the 20 june on dried flowers.

The colour samples are up in my window for a testrun in direct sunlight, something you normally always should avoid when hanging handpainted things of any kind, but this is to see how long they might last in direct sunlight.

Next time I do iris green I will make sure of the following things: