It’s almost a year since Master Johannis came to DW and taught how to make medieval pigment and kick started my interest in making my own pigment. In addition to teaching how some different pigments were made, he also had with him a manuscript in which all the material used to make it was made by members of SCA. Everything from parchment to the cultivation of the linen, as the thread to which the book is bound is spun off. Read more about the project Calf to Codex here. He also brought with him a handmade paint brush that he showed us.

The summer after his visit, I deepened my knowledge of pigment making and did a lot of pigment. Some of them you can read about in earlier posts. I also, amoung other things did my first paint brushes. Since then, I have had time to collect a lot of period materials and my interest in what kind of period tools a scribe or painter would have used have also deepened. So I have decided to try and do a “complete” period scribal kit.

Period materials and tools I have made during this year
Many different pigments from minerals and plants.
Paints from my own pigments (and some paint from bought pigments)
Iron gall ink
Quill pens
Reed pens
Paint brushes
Glair
Gesso
Pine resin
Fish glue
Shell gold 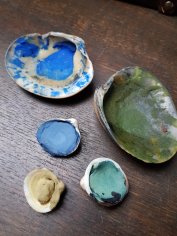 Azurite blue made from azurite stone, ultramarine made from lapis lazuli and 3 shades of iris green 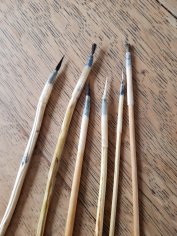 Some of my handmade paint brushes 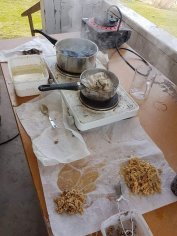 Boiling and cleaning pine resin before DW to Master Johannis 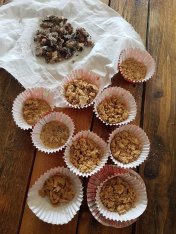 Pine resin before and after boiling

Period materials I have collected this year
Shells from painter´s mussel that Sir Ludvig av Eke helped me pick.
Oyster shells and other shells.
Different clays to make ochers from, blue clay from the sea bottom amoung others.
Old bones from animals like elk and birds (for pigment making)

A empty painter´s mussel. There are 3 kinds in Sweden and we believe that this is the one called Unio crassus in latin

Period materials I have bought or been gifted
Quill knife bought from Swedish armory, Lord Felrik
Small ceramic bowls bought from Ida in Aarnimetsää (SCA-Name?)
Leather case for quill knife done by my father
Quill knife, sharpener and lead stylus made by Honarable Lord John Smith
Ink from Lady Swanhilde
Mortal and pestle (bought some myself and been given one from Viscountess Blenda)
Small glass bottles from Lady Katarina
Brass water cup from Mistress Beata
(I might have forgotten some things) 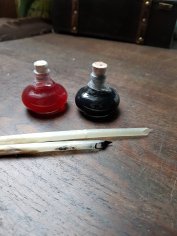 Ink from Lady Swanhilde and quill pens made by me 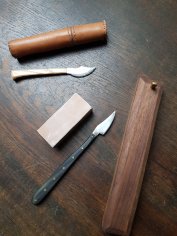 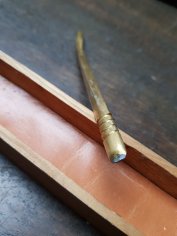 Lead stylus and wood case made by John 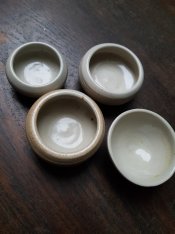 ceramic bowls made by Ida

Things missing in my scribal kit

In other words, I am already on my way in having a period scribal kit. But some things are still missing.  The plan is to make things of ceramic like tiny bowls for storing paint in since not all paint can be stored in shells. I also want to make a brush tray, a pounce pot and maybe a ink pot. I might end up with none of these things since ceramic is not my favorite material to work with. A wax tablet and one or more leather cases to store brushes and quill pens in. A writing slope suitable for camping events and other travels are also on the list.

I have also saved one of my dogs tooth from when she was a puppy. This will be given a handle and be used as a burnisher for gilding. Hematite and dog tooths are both good using as burnishers according to Cennini  (p. 82).

Master Ranthulfr Asparlundr, who is a huge inspiration have written a article about scribing tools at his homepage. He made a beautiful scribal kit containing a ceramic pounce pot, a tooled leather case, a ink pot and more. In this article linked above he also writes interesting thoughts about the use of brush trays.

After reading a blog post about Boccaccio’s Women Artists written by Christian Nikolaus Opitz I learned more about the women in the pictures below. The picture on the left is picturing Tamaris painting, besides the artist see a apprentice working with a muller, preparing pigment or paint on a slab.

I am not sure but guessing that the artist in the picture on right is Marcia. I need to find out more about this two artists later on. However my main interest in both these pictures is the materials they use and mainly the brush trays. 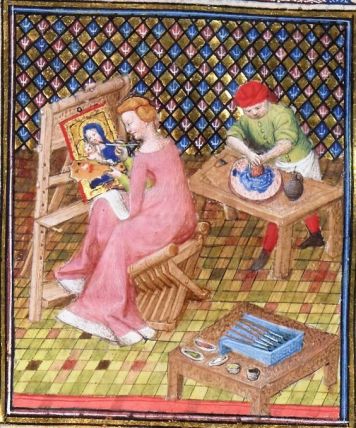 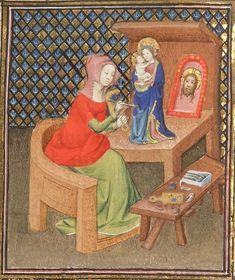 I have ordered ceramic clay and plan to try and make one or more brush trays. Decided to use clay because of the blue-gray and white color of the trays that made me think they were made in clay. It might also be painted woods or maybe metal?

More about my plans on making a scribal kit will be posted in a later post: Planning a period scribal kit, part 2. Hopefully you can also read about the progress in making different things later on.