Suming up the SCA year so far

In January I started the year with attending twelfte night in Attemark were Atli was taken to vigil for becoming a knight. Then in february I went with Baron Engli and Baroness Astridh to Nordmarks University in Aros where I helped Renika with holding the A&S competition because she could not attend.

In March it was time to attend Sankt Egon and Gotviks baronial investitur were my lovely friends Einar and Solvind was steping up. A week before this event I started to make Einar his caftan.

In April me, Astridh, Engli and Jovi went to the Crown tourney in Polderslot. It was a long cartrip but also very fun.

In May we had a “fixing weekend” at my house, where we gave Merlin the tent “some love” and made ourself some garb. Then I went to Double wars: My first whole one since I was a student. From now on I will try to     take time of from work to do that every year! It was one of the best DW:s ever even do it also was very hard! I held a course in pearl embroidery, helped Lo in the kitchen, attended some classes and lot more. I´ve also got my Panache.

In June I went to Gotvik for a “minievent”, we made some patterns, some sewing and hanged out. And in July I went to the US for a weeding and then in the end of July- Agust Pennsic wars started and I was there for two weeks. Two weeks who changed my mind about what the SCA is. I learned so much and absolutly feel in love with the event and some people

September: I attended another minievent in Gotvik and had a mini course in illumination and guilding. In October I will attend Crown tourney in Aarnimetsää. My first time there. Then I will go to Festivalo de Caderas in Gotvik and then I will probably not attend anymore event this year. But I don´t know that yet!

So it has been a year full of events. This is probably because of my sickleave from work. The only thing that I found really fun to do have been to attend events and do other things related to the SCA.

And the crafting then…

Lately I have been thinking about that my dressmaking stands kind of still and I want be able to finish both the green wool dress (that I havn´t even started on) and the greybrown to Crown which is in a couple of weeks.

We bought a house this year and we have started to tear part of it down this month and at the same time I have on parttime gone back to work so right now there is not much time for crafting. But this year really have been productive, this is what I´ve done:

Grey/brown cotehardie in the making with tablet weaven edges, lacing and buttons 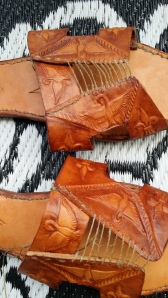 Four scrolls one of them was for the cover to Silversparren. I also have three more in making right now 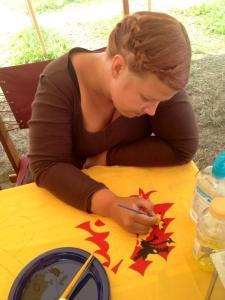 Last but not least I´m waiting for my name and arm to get approved. They now have past all the meetings and theres only waiting left!